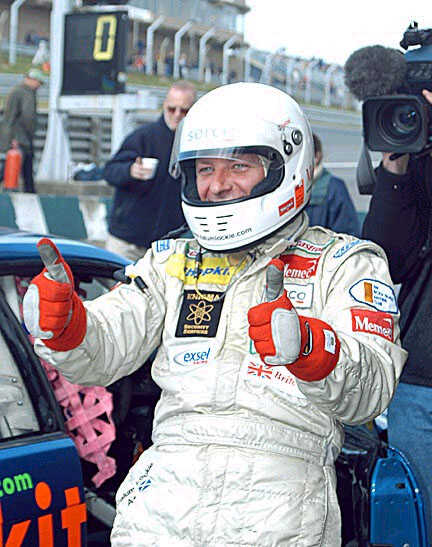 Sideways at Snetterton During BritCar

David decided we would compete in the non-championship Britcar race at Snetterton. This was very welcome as I love Snetterton and it has been very good to me across my career.

It was a one-day event and we elected not to test either as there was a 20-minute warm-up and 30-minute qualifying before the race. As we both know Snetterton well we thought that would do.

David drove the 20-minute warm-up session and was straight into lapping well. I had to wait ’til qualifying where we employed our usual strategy with David doing his mandatory 3 laps to qualify to leave me the rest of the session to determine the grid slot. As usual, David did his bit faultlessly and handed it over to me. Having decided not to test it was typical that we had a small imbalance but nevertheless, after warming up the new tyres I posted a 1. min 50.03-sec lap for P3 with only the 2 prototypes ahead. No sooner was that done than it was deleted for track limits! I had got a bit squirrely out of Hamilton and popped the pressure pad.

Time was running out but I had one more lap in hand and gave it best. P3 overall on 1 min 49.8 did the job. However, there was too much oversteer in slow corners so we made some adjustments which sorted the problem come to the race.

I was elected to start the race in our normal format. It was spotting with rain but definitely not enough to change to wet tyres. We set off from the pits for the formation lap to the grid. However, the car did not feel right and as I drove around the lap it felt worse and worse. I radioed the team and told them I was coming into the pits. Just as well as there was a problem with the right rear wheel. As ever the team sorted it fast and I drove to the pit exit to await the green light after the field had taken the start.

I was released on cold tyres and the rain was increasing. This was going to be fun!! I gave chase and slipping and sliding made good progress and was soon overtaking the backmarkers. At the end of the first lap, everyone pitted as the weather was definitely not improving. We decided to roll the dice as it was still not heavy and there was brighter weather on the way. If it stopped raining we would be a whole pit stop ahead which could give us a crucial advantage. At first, it was working well and I was not losing much time as I tried to work the tyres and bring them up the temperature. I pushed and pushed and suddenly I could feel the grip increasing dramatically. I was 5 seconds faster than the field and I thought we had pulled a masterstroke! Then it really rained and I dived into the pits.

However, we had done enough and I emerged on wet tyres in P3. I gave chase and soon closed the gap to the Ferrari in P2. I swept by and set my sights on the Radical RXC prototype in P1 and we had a great battle over the next few laps. Finally, the pressure told and he fell off at Bombhole. I was back in the lead but had to pit that lap to hand over to David!!

After a good pit stop David set off into rapidly worsening weather. Very soon there was a huge rooster tail coming off the back of the car as it passed and standing water was making it very tricky with aquaplaning a big worry. Through it all David drove a blinder and brought it home safely to complete a class pole, fastest lap and win.

A huge thank you to David for putting me in the car and FF Corse for the usual top job. The next race was the Goodwood Revival in the stunning 1938 Maserati 6CM Grand Prix car for the fourth year running. Last year it was a pole and second…..