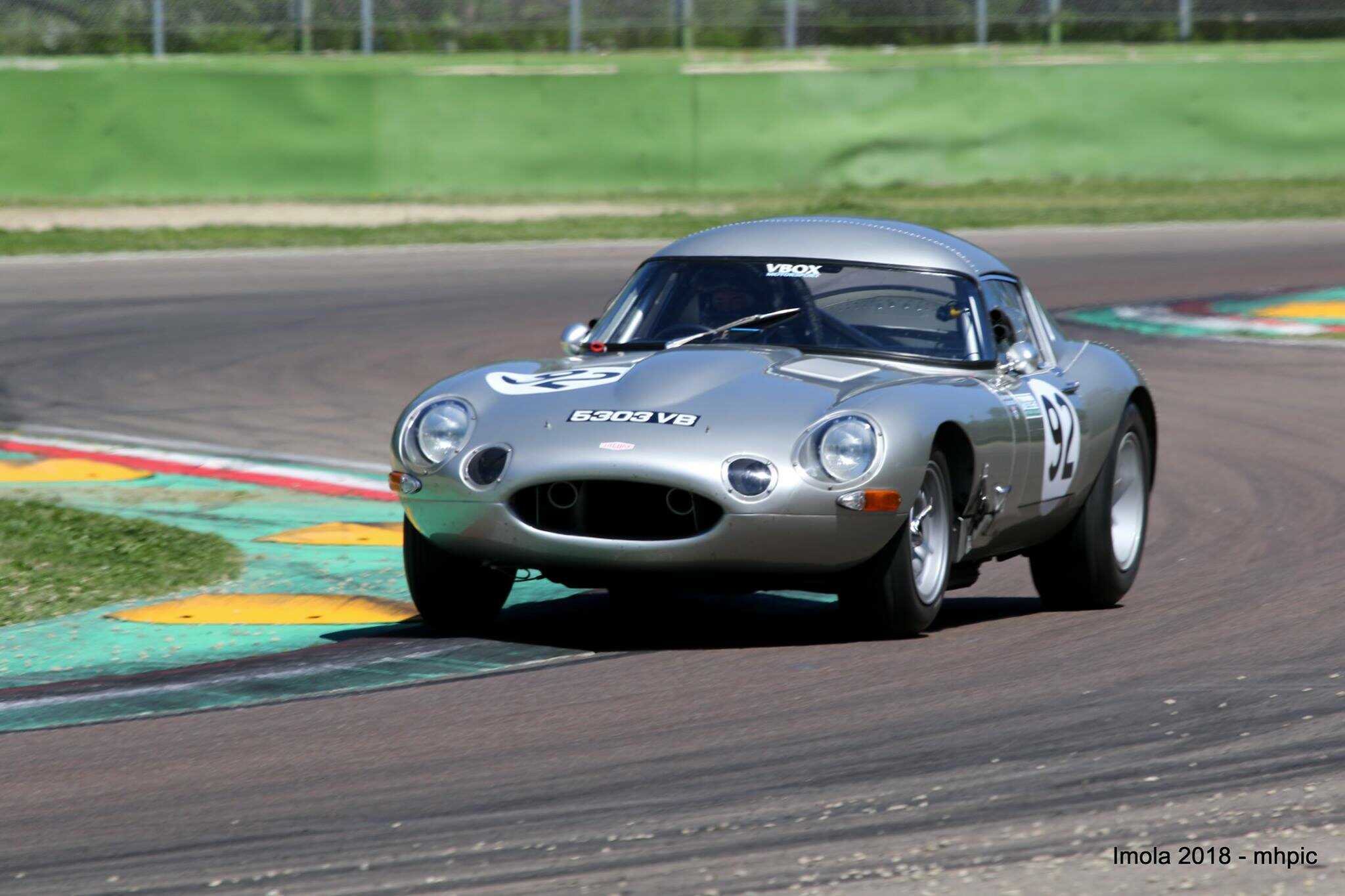 After the great successes of the Donington Historic Festival, we reconvened at Silverstone for the International Trophy. I was again driving with Julian Thomas in his fabulous low drag lightweight E Type Jaguar.

First up was testing on Friday and although there was not much time we were right on the pace from the beginning. This boded well for the Jaguar Classic Challenge race on Saturday and the GT and Sports Car Cup race on Sunday.

Saturday morning was blustery and damp and by the time we were qualifying for the JCC, the track was damp but drying slowly. These conditions are extremely tricky, particularly with the torquey and powerful engine, and usually mean the last lap is the quickest as it dries.

Julian went first and definitely had the wetter part of qualifying but still put us on pole! Next up I tried to put in a banker early but traffic hampered me. However, the track was definitely getting faster and the last lap with wild high-speed oversteer and a modicum of risk put us on pole by 2.1 seconds. A great start to the weekend.

Qualifying for the GTSCC was next and again Julian went first, putting us on pole with a cracking lap. My session did not go so well as I was hampered by traffic and then yellow flags. As the session got quicker we ended up P2 in class and P3 overall which gave us a great starting slot with something ahead to aim at.

The JCC race was after lunch and due to tactics, I started. Blasting off pole in very slippery conditions I held the lead and once things had settled down started to pull away working hard to control some huge power oversteer. Brilliant fun.

Then came a safety car and I dived for the pits. The owner of the car must do at least 50% of the race so tactics demanded I pit as soon as the safety car appeared.

Julian got held in the pits as the safety car train passed. Then off he went, with several fast cars in close attendance. This was going to be big pressure and excitement.

And so it was with the lead changing several times a lap. On the second last lap, Julian was baulked by a backmarker and the two very experienced drivers behind pounced. Coming across the line to start the last lap he was 3rd but right there.

Into Copse was a great move and he was second. Battling hard and pushing the limits Julian made the move of the weekend into the second last corner and secured our second straight win in the series. And to cap it off Julian was voted Driver of the Day for his superb performance. And he got the fastest lap on the final tour!

I had to leave straight away as Sean and Laura Danaher, for whom I race the wonderful 1938 Maserati 6CM GP car, were celebrating Sean’s 50 years as a Maserati expert. And a superb evening it was too!!

Sunday was unexpectedly dry. The weather held and Julian lined up for the start of the GTSCC race.

My prediction was he would be second by Becketts Complex and grab the lead somewhere around the rest of the lap. And so it was!! A stunning first and subsequent laps netted us fasted lap of the race and kept him in the lead until another safety car period brought him to the pits.

Change done, I blasted out onto the track to catch up on the safety car train. And then three laps of cruising around. Due to our pit stop timing, we had dropped to second through no fault of ours. Ahead was a very fast Cobra and behind a similarly fast Lister-Jaguar. This was going to be fun…

The green flag came out and as we crossed the start/finish line I gunned it in a determined mood. I got a great run out of Becketts and slipstreamed past the Cobra into the lead. Head down I pushed hard with big oversteer due to track conditions I surmised. Going onto the next lap I had several car lengths lead but then an accident brought out the red flag. Race stopped.

Rules state that a red-flagged race is declared at the end of the last fully completed lap. Unfortunately at that point, we were second but it was a great race and another excellent podium.

Big thanks and congratulations to Julian and the whole team at Denis Welch Motorsport for another excellent weekend.