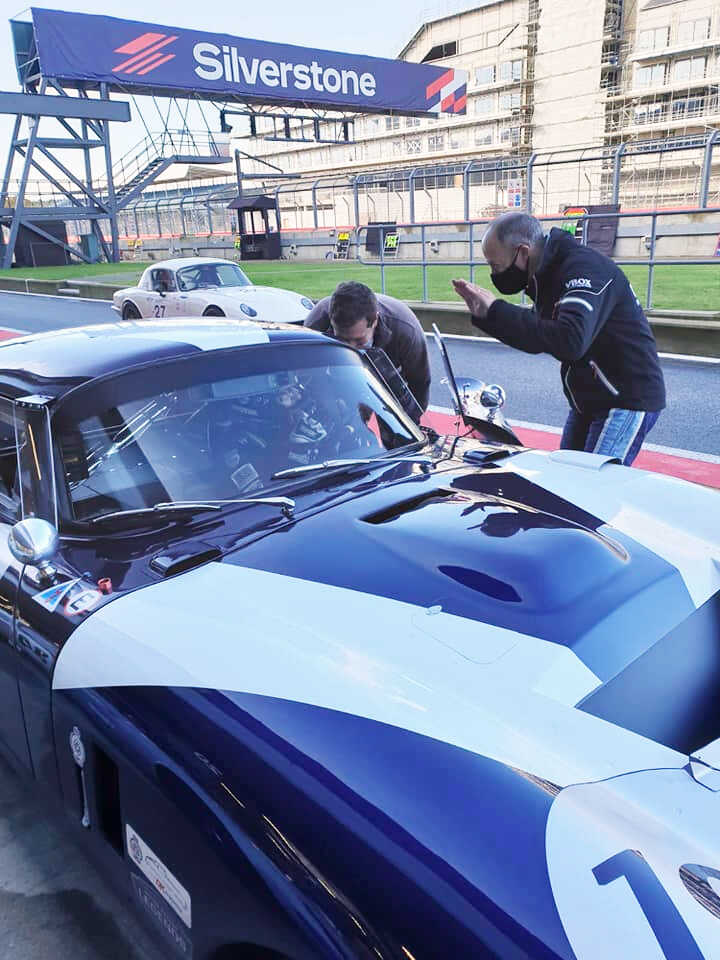 After having flown in testing a couple of days before Julian and I were really looking forward to what would probably be the final races for us of this turbulent 2020 season. Qualifying for the 1-hour race in the Cosworth saw us on pole by 0.852 secs in wet but drying conditions.

The track was the same for qualifying the Daytona Cobra and I was locked in a battle with another Cobra piloted by Andrew Jordan of BTCC fame. Pole went back and forth between us until I passed the line 4 seconds before the chequered flag. This was it and I had a great lap to go on pole by 1.682 secs.

The first race was in the RS500 and Julian made his usual great start to lead the first time around. Then the performance seemed to sap away and we were unable through our sessions to stay in touch with the leading cars so finished P3. Podiums are good! Then it was time for the big one! The RAC Historic Tourist Trophy race was to be run over 3 hours with two mandatory 5-minute stops for fuelling and driver changes.

Julian blasted away from pole with Jordan in hot pursuit. Lap after lap they battled until Julian edged away. Then came the rain and the gap between the two front runners ebbed and flowed. Seventy minutes in and we completed our first pit stop under Safety Car.

I was in, roaring out of the pits and after some rearranging of the cars following the safety car the P2 Cobra was only 4 seconds behind.

The green flag flew and I gave it everything, blasting away from the following cars with Jordan’s teammate at the wheel. I pushed hard setting the fastest race lap, and then came the rain again. Wow, was it slippery!

500 bhp and a truckload of torque sent me skittering over the surface at every corner.

Keeping it more or less on the wet black stuff amid fantastic big opposite lock power slides, I completed my stint and after 70 minutes handed back to Julian with a 1 lap lead.

As usual Julian reeled off the laps perfectly and we came in the winners after an amazing 3 hours of flat out racing around the Silverstone Grand Prix Circuit. Huge thanks as ever to Julian and Jade, the whole team at Woolf Engineering, Motor Racing Legends, DK Engineering and all my supporters. Here’s to a better 2021.