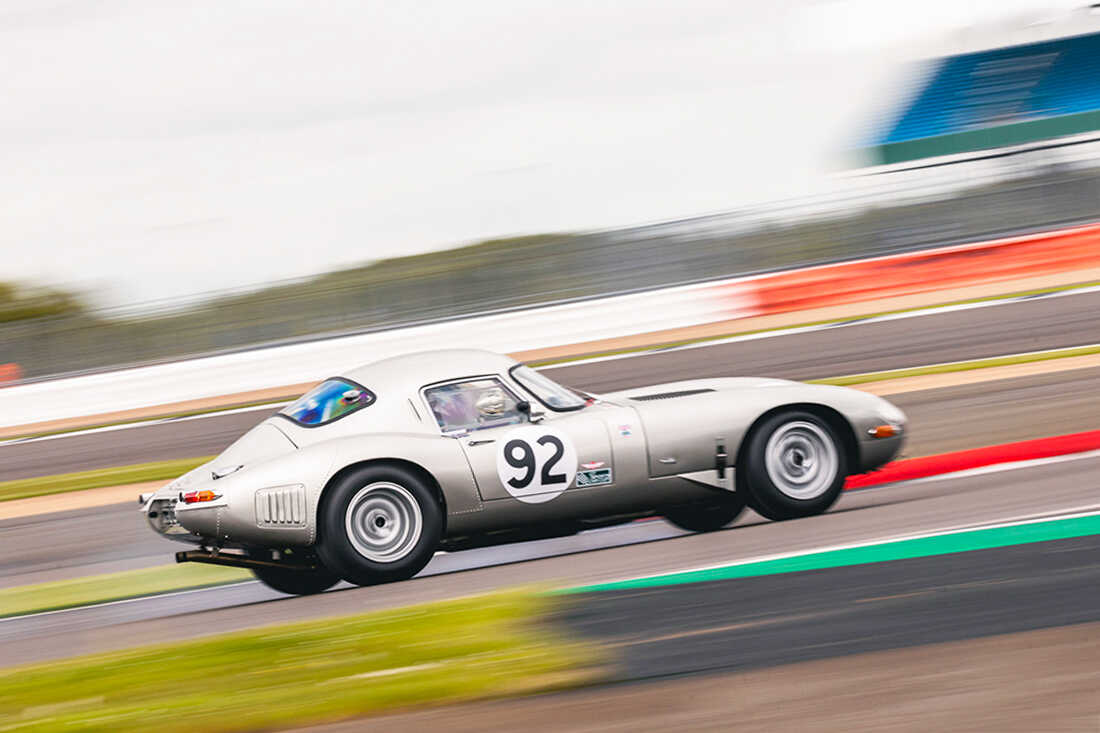 Dancing in the Rain at Silverstone.

At last, a big weekend of racing at Silverstone for the HSCC International Trophy! But first testing in Julian’s fabulous low drag light-weight E Type Jaguar.

This was its first outing for a year and a half so eagerly anticipated. And it did not disappoint!

Driving this car really is a sublime experience with that long silver bonnet and wailing straight-six engine. All was set for the GTSCC qualifying and 1-hour race on Sunday. In between, I was, at last, back in the mighty March 717 CanAm car.

Weighing 800kg and running around 830 bhp with bags of torque, this was going to be interesting if the weather forecast was anything to go by. Against all expectations, the qualifying session was not wet although there were plenty of damp patches all around the lap.

I was in at the deep end, not having driven the car since 2018. Getting the tyres warmed up, I then launched into a qualifying lap and hung on like crazy. Despite the slightly treacherous conditions, I set a 2.02.989 lap to go on pole by 1.687 from the very rapid McLaren M8F of Dean Forward, pulling over 180 mph down Hangar Straight.

The first race approached rapidly. For some strange reason, the track licence has pole on the left-hand side, fine for staggered standing starts but negating the benefit of pole for rolling starts as the P2 car has the inside line into Copse.

I made a plan and it worked. Rocketing off the line I braked as late as I dared and managed to drive around the outside of Copse to hold the lead into Beckets. Then it was head down and go for it!

Despite a long safety car period, we ran out of the winners with the fastest lap of 2.01.850.

Sunday weather was looking grim too. First up was qualifying in the E Type. Jools went out first and set a blistering pace with some nice early clear laps, putting us on a provisional pole.

Then it was my turn and try as I might I could not get a clear lap. In the end, we were P1 in class and pipped to the overall pole by the very rapid Lotus 15.

The second race in March started dry. With the same pole position problem, I reckoned my trick in race 1 would not work and so it panned out.

Instead, I braked a little early and turned the car sharply so I could get on the power early. This got me into the lead up to Maggotts and I streaked off. Around lap 3 it started to rain and I was quite happy plodding around on slicks with a 25 odd second lead.

However, the race was stopped for safety to be reconvened after lunch. After much looking at the sky it finally monsooned and we were all on wets for a new race.

A straightforward start left me in the lead and with a huge rooster tail of spray made my way round to claim a second win with the fastest lap.

Finally the much-awaited GTSCC race in the E Type. Jools drove his usual blinding stint, engaged in a glorious dog fight with the Lotus 15, the lead changing almost by lap. After 30 odd minutes he pitted right behind the Lotus and so, as I exited the pit road I had him in my sights.

Giving it the maximum, I out braked it into Becketts and focussed on making a gap and bringing it home safely.

So, another excellent race with a full house of pole (class), fastest lap(class) and overall win.

Huge thanks go to Jools and Jade for the opportunity and Jeremy and Mark at Denis Welch for looking after us.

Also to the GTSCC Team for another excellent event. Huge thanks also to Le Patron without whom the opportunity to race the March would not happen, and to Richard Dodkins and Team for all their efforts to ready the car and to all at the HSCC for running Thundersports. And finally, my thanks to all my supporters.