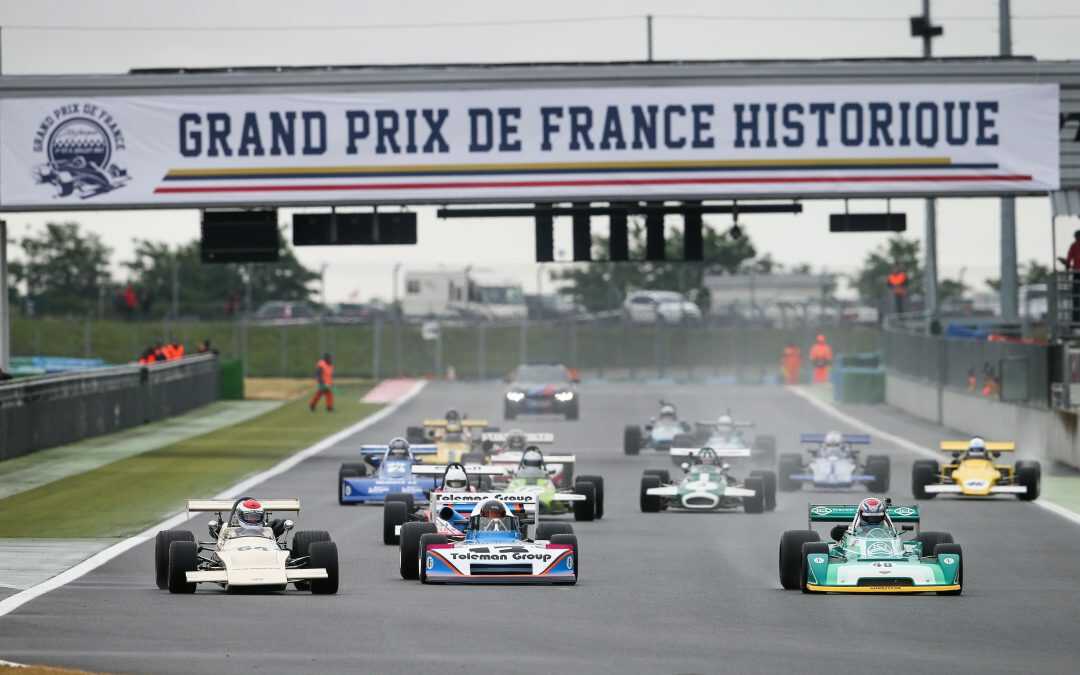 Racing In A Daytona Cobra

The next rounds of the Masters Historic Races were at Magny Cours in Central France. I was very excited as I have never raced there and it is always great fun to pitch myself against drivers who have a head start.

Arriving at the circuit it was already really hot with temperatures in the 40 centigrade area promised for the weekend. This was going to be tough for the cars and drivers especially in the Shelby Daytona Cobra which is hot at the best of times.

We had a 25-minute session on Friday morning to test both the Cobra and Falcon and learn the circuit. Unfortunately, the team truck had suffered a problem en route so the Chevron B8 was a no show. After last years fantastic FIA Masters Historic Sportscar Championship win it is not looking good for a repeat.

With 15 minutes in each car, learning the circuit and scrubbing in tyres it was over in a flash and then we had a long wait till the Master’s Gentlemen Drivers qualifying in the Cobra in the early evening.

It was amazing that the Wolf Engineering Team had repaired and rebuilt the Cobra in 2 weeks since its fiery incident at Donington. It ran perfectly and we were all set for the qualifying showdown.

Julian went first and set a blistering pace to put us on the provisional pole. The cockpit was unbelievably hot with no air cooling as the air temperature was about the same! We were on pole but with 20 minutes still to go and second drivers still to qualify. I jumped in and blasted out of the pits for my first proper flying laps of the circuit. We had been pipped by 0.060 of a second so I was going to go for it.

I gave it everything and I passed the line to put us on pole by nearly a second. However, the time was deleted for a track limits infringement. I had come upon a car going very slowly in the first chicane. To avoid an incident I had to swerve and the initial view was I had gone off the track. However, race control reviewed it later and the official time sheet came out with our pole intact.

In the French heatwave, we were having to manage engine temperatures very closely. I had to drive two laps to cool the engine before giving it that last flat out lap by the end of which the temperature was at the maximum permissible as I crossed the line.

Four poles from four qualifying sessions this season so far. We were pleased! And very hot!

Saturday morning came with the temperature set to rise to nearly 40 centigrade. The first session was Pre ’66 qualifying in the Ford Falcon. Again, Julian put it on pole and then we swapped. Then followed a lap by lap battle for pole between us and another, very well driven Falcon. I thought I had it when a margin of 1.1 seconds appeared on my pit board but no, next time around I was a tenth down.

I knew it was the last lap so gave it my all. Having been very mindful of other drivers qualifying I had cooled the car down and then set off for the lap. All went well till the last two corners and there were two cars going slowly right in my way. I still blasted out onto the straight and saw the chequered flag so lifted off thinking the session was finished. Alas, I had misjudged it and lifted off too early so lost my advantage and we were P2 on the grid having been 2 tenths up. I had a quiet word with myself later.

That evening came the 90-minute Cobra race. The sun had been beating down relentlessly all day and it was roasting in the pits. As usual, Julian started and drove a textbook race to hand over to me with a big lead. He had managed the temperatures perfectly and I jumped into the car that felt like I was going to be cooked by the end of the first lap. The team did a fantastic job, replacing both rear tyres as a precaution. We had seen peak tyre temperatures the previous day of 179 centigrade.

I drove out onto the track and got up to speed. The first time past the pits we were 39 seconds ahead and holding nicely. I watched the water and oil temperatures and managed the brake and tyre temperatures all in cockpit temperatures in excess of 55 centigrade. This was hot work…

And so it ran out and we won by 40 odd seconds. Our 3rd win from 4 races and had it not been for the fire at Donington it would have been 4 out of 4.

The Pre ’66 Touring Car race was scheduled for a 0900 start but due to a massive oil spill, we were delayed by half an hour. This meant the relative cool of the morning was gone and we were back into roasting conditions. The Falcon engine temperatures had been reasonable but we were concerned re the tyres and brakes with several big braking areas.

Julian had a fantastic session battling with the other Falcon until he finally found a way by and set about creating a gap. When the pit stop came we were a few seconds in the lead and I blasted out of the pits hoping not to see a black Falcon looming close. However, there it was and going at a great pace. I worked hard but whatever I did that gap kept coming down until finally, with only 5 minutes to go, he out dragged me out of one of the hairpins and that was that. I had a long brake pedal and the tyres were shot and I had no answer, so second place it was!

All in all a cracking weekend with two good results all in incredible temperatures. Back to reality and the fitness programme to ensure we keep the fight all the way to the season’s end.

Next up is the amazing Silverstone Classic at the end of July. I will be racing the Cobra, Chevron B8, Ford Falcon, Kaliber Ford Sierra RS500 and a 1936 Delahaye 135s. Can’t wait!

As ever a huge thank you to Jade and Julian and the Teams from Denis Welch Motorsport and Andy Woolf Engineering.