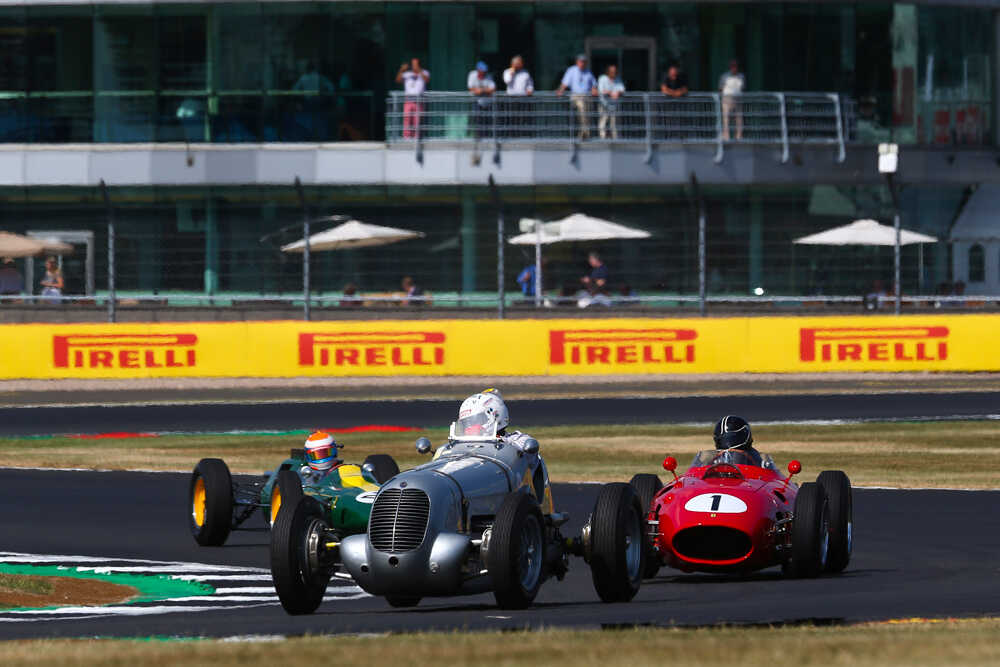 I was extremely privileged to be asked to lead the Parade celebrating the 70th Anniversary of the British Grand Prix in Sean and Laura’s stunning 1938 Maserati 6CM Grand Prix car over the 2018 British Grand Prix weekend. We were scheduled to drive 3 laps each day with an amazing cavalcade of Grand Prix cars from 1938 to 2016 with such luminaries as Jackie and Paul Stewart, Damon Hill, and many others driving.

In the drivers briefing, we were told it was a demonstration only, not a race.

We should only overtake on the straights and reach a top speed of around 100 mph. Friday’s run went off without hitch and I got going as soon as the green flag was shown. Doing my own thing I was surprised not to see faster cars coming up behind me. 2 laps in, coming out onto Wellington Straight at around 100 mph, suddenly I heard this peculiar noise and thought it was from my engine.

I looked at the gauges and was prepared to switch off when the 2010 V8 Red Bull Formula 1 car blasted by me at about 150 mph and disappeared off toward Brooklands Corner.

Wow, that V8 engine noise reminded me how F1 cars should sound!! Having never driven this car on the GP circuit next time round I looked at my rev counter down Hangar Straight and saw I was pulling 7,200 in top gear. That is 140 mph. I would love to race it on the GP circuit.

Saturday’s parade went well but Sunday was amazing with a crowd of 140,000.

Again the parade went off without hitch and the pace had certainly picked up. The 2016 Mercedes came past me on Hangar Straight at about 180 mph and then the Red Bull car wailed by me going into Luffield.

What an honour and a huge thank you to Sean and Laura for bringing the car and to Silverstone for the invitation and thank you to Jakob Ebrey for the photos.