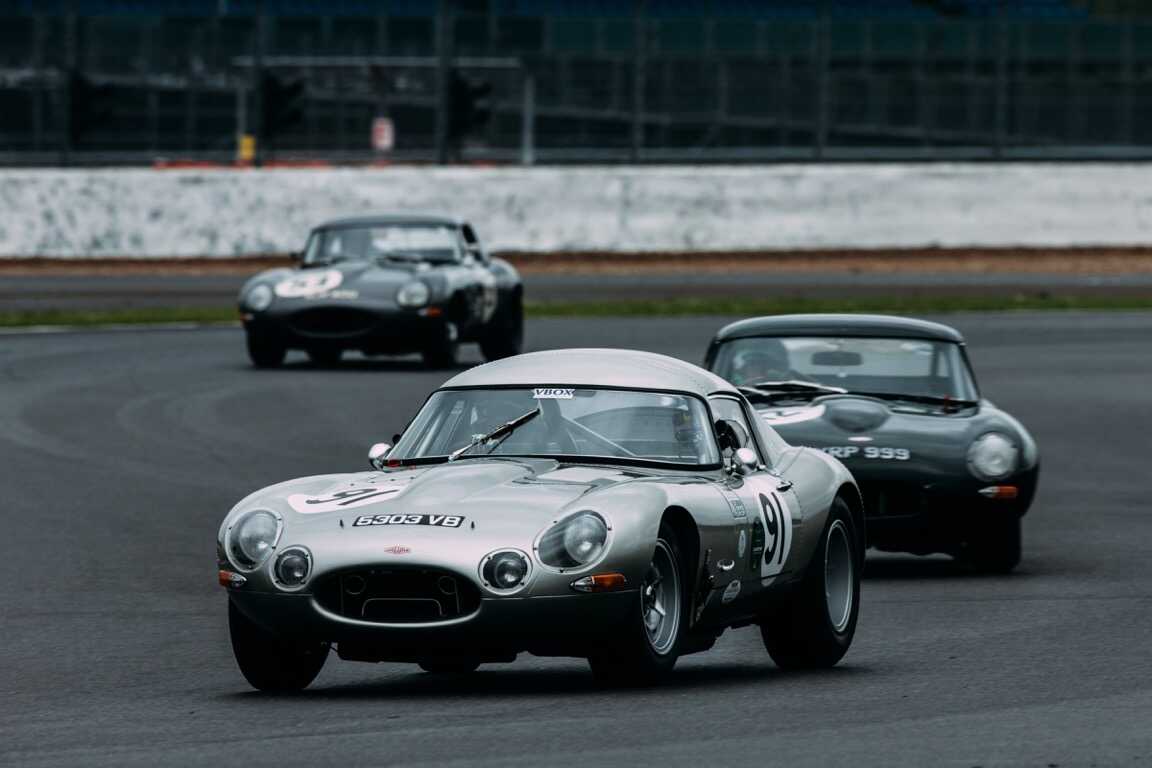 The Master’s race held in Dijon-Prenois

Julian Thomas texted me and the news was we were 1 point off the overall lead of the FIA Historic Sportscar Championship with one round to go!

So a late decision was made to add the Master’s Races weekend at Dijon to the calendar. This was doubly exciting as neither of us had raced there before. The first sight of the track was an apparently never-ending straight.

This was going to be fast… And the rest of the lap was a wonderful sinuous snaking piece of tarmac that boded well for exciting racing. Apart from the Chevron B8 in the Sportscars we were also racing the stunning low drag, lightweight E Type Jaguar….so two beautiful cars on an equally beautiful track.

Testing went well and we were fastest in the Chevron and hovering around the top four in the Jaguar.

Next up was qualifying and we were mindful of the championship points situation. To keep it simple we had to win, then it was irrelevant what anyone else did. After that, it became more complicated with second places and numbers of competitors in each class determining how many points would be awarded.

We decided to treat it like any other race and aim for the win!! Pole was therefore important. There were two other drivers who could win the championship. With new tyres, Julian set a blistering pace early on. Then others started to catch up but there was a gap of 0.7 secs. I jumped in and on my final lap extended that to 1.0 secs and we were safe. Mission 1 accomplished. We qualified the Jaguar 4th against strong opposition from the almost unbeatable Cobras.

Saturday afternoon brought the Master’s Gentlemen Drivers race of 90 minutes duration. Julian made his usual great start and went straight to 3rd place. He worked away at the Shelby Cobra in P2 but it had much better top speed and more power so it was going to be hard.

At one point he nosed ahead but the superior power took the Cobra back in front again. As the pit window approached I was ready to take over only for the car to appear in the pits with a broken fan belt. It had got a little hot and with the time it took to replace the belt and let it cool enough we decided not to continue. A disappointing end to the Jaguar season.

The final and most important race of the season was scheduled for Sunday at 3 pm. In usual form, Julian took the start to the hour-long race for the championship.

And a great start it was, holding position despite very close attention from a faster car in another class. Lap after lap they changed positions until finally Julian broke clear and moved well into the lead. So it was all down to me!! I jumped in and set off out of the pits. On the one hand, I needed to push, on the other, not too hard as a mistake might end up very costly…

However, we had timed the pit stop to perfection and Julian pitted just as a safety car was called. This gave us an almost free pit stop and once everything had settled down I had a nice gently drive to the chequered flag with a lead on over 80 seconds. We had done it!!! We are 2018 FIA Historic Sportscar Champions!!! And there was more to come.

The FIA representative told us we would be receiving an invitation to not one, but two awards ceremonies. The first would be the FIA Awards Gala in St Petersberg and the second the FIA Historic Awards in Paris.

It is going to be a busy winter. As ever a massive thank you to Julian and Jade and the whole team who made this possible. Next stop the Algarve Historic Festival around the amazing Portimao circuit.