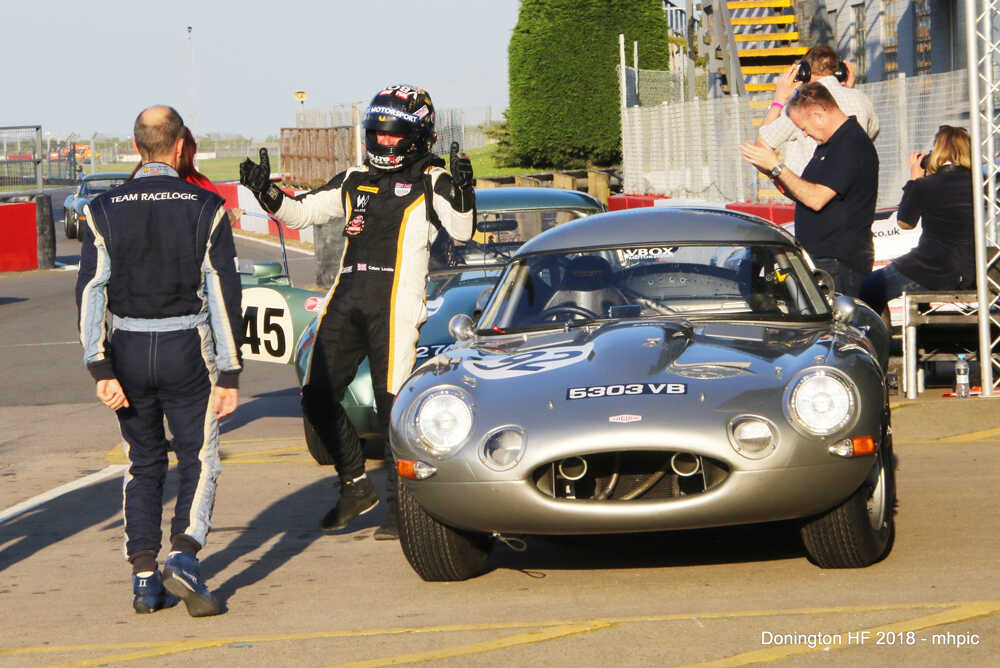 Two weeks after a fantastic weekend at the very impressive Imola circuit we headed off again for the Donington Historic Festival.

The circuit is now under the control of Motorsport Vision who have commenced a huge programme of investment and the benefits of that were very evident. We were racing in the 1-hour Jaguar Classic Challenge in the low drag, light weight E Type Jaguar with which we won 2 years ago and the 45-minute HRDC Pre ’66 Touring Cars in the Ford Falcon. Testing on Thursday went well and with a little set-up work, the Jaguar was handling superbly.

The Falcon has been much improved due to some great work by the team. Friday brought qualifying and lots of frustration. Good for the weekend were huge grids but finding space on track to put in a good lap was nigh on impossible. Initially, on a provisional pole, I took over from Julian and set about keeping us there.

Lap after lap was spoiled by slow traffic. One lap I was 6 tenths up, good enough for pole but came across a slow-moving car right in the middle of the chicane scuppering the lap. Despite every effort, we ended up P4. Not happy!!

But only 4 tenths off pole so all to fight for. The Falcon qualifying brought much the same story with not a single clear lap again leaving us P4 on the grid. This time only 0.090 secs from the front. This was better but still frustrating as the pace was clearly there.

Putting the previous day’s difficulties behind we had a leisurely start to Saturday as the race was scheduled for 5.45 pm but did not start till 6.00 pm. Julian made his usual excellent start and fought his way to P2 within a couple of laps. Then we were notified of a 10 second ‘jumped’ start although looking at the V Box film after we could see he had not jumped the lights.

However, it turned out it was for ‘out of position’ on the grid and although still puzzling there was nothing to be done. Holding on to P2 till the pit stops, we made an excellent stop and I shot out into the lead! Going like the clappers I pulled out a big lead on P2 and just as well! It became apparent that we had suffered a little finger trouble with timing the stop and it was too short.

We all thought the resultant drive-through penalty was going to scupper us but I had done enough and we held onto the lead by about 5 seconds. Pushing hard I extended the lead and we came home for the victory. The Falcon race was scheduled for 5.30 pm on Sunday but Julian was racing a famous Healey 3000 with its owner so we went to the circuit early to enjoy the racing and fantastic array of fine and historic cars.

His race went well with the fastest Healey lap and P3 in class. Then came the Falcon race and again Julian shot out of the blocks and went straight into the lead which he held until he pitted. However, there had been a safety car period and we elected to stay out and run till the end of the pit window. This meant we suffered a small disadvantage and when I returned to the track after our stop I was in P3.

I gave it plenty and within 2 laps was back in the lead and pulling away at about 2 seconds a lap. Good news we thought until smoke began to appear in the cockpit. I knew it was close to the end of the race so keeping an eagle eye on the gauges I tried to nurse the car to the end. Sadly it was not to be as the smoke got worse and worse and fearing engine damage or oil dropping on the track, apart from the somewhat limited visibility of driving in a smoke cloud, I switched off and pulled off with six minutes to go. Later we discovered the oil cooler had split so there was no alternative. All in all a great weekend, our first win and 4th podium of the year.

The next stop is the Masters at Brands Hatch driving the E type, Falcon and Chevron B8. Can’t wait!! Again, a huge thank you to Julian and Jade, Jeremy and Mel and the team at Denis Welch Racing and all the marshals without whom we could not race.