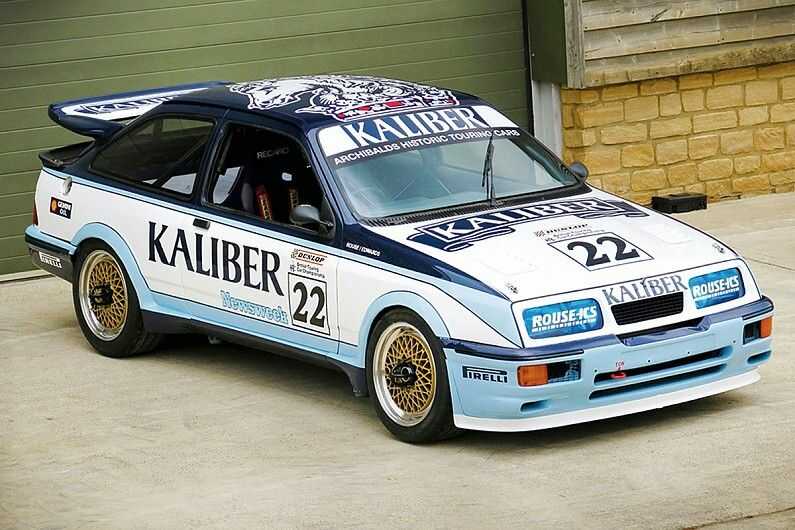 A year has shot by and we were back at the hugely improved Donington for the 2019 Historic Festival to race Julian Thomas’ fantastic array of cars. Low drag, lightweight E Type, Ford Falcon and the glorious Kaliber Ford Sierra RS500 running 576 bhp on full boost!

Friday qualifying was wet and freezing cold. Julian ventured out in the Jag for the Jaguar Classic Challenge qualifying and did his usual fantastic job sitting on pole for much of the session. The track was drying very slowly and so the times dropped and dropped. I was working hard and knew the last laps would be crucial.

However, I did not get it quite right, along with a mistake at the Chicane on my last lap so we lined up third. Considering we won it from fourth last year I was not too upset!!

Next up was the Falcon for the HRDC All-Stars session and again Julian went out and set a blistering pace. We were in with a great bunch of various classes including a Daytona Cobra. Being homologated on skinny 5-inch rubber and weighing 1200 kg we always struggle a little in the wet especially against such as Minis which are so nimble and light and can use their power well. I went out next and set about keeping us on class pole.

The Falcon was going well and with so much power we were wheel spinning all the way down the Pit Straight from the Chicane to braking for Redgate. The grin was huge and we lined up P1 in class and P8 overall. A dry race would change the picture and that was what was forecast. Fingers crossed.

Next up was the big one. The Ford Sierra RS 500 was looking fantastic and getting a lot of attention. I have only driven it for a few laps at Silverstone in the dry and never in the wet. The track was streaming and we had Dunlop’s superb Monsoon tyres fitted. Julian set off and was running well but only had a couple of laps before a safety car intervened.

With a short session, he pitted from P3 to ensure I had a decent run. I was expecting a bit of a bucking bronco with loads of opposite lock, from the tales I had heard of these fearsome machines. None of it! The car was fantastic and with suitable throttle control, the slides were minimal.

Pushing on I got more confident to push and ended the session on pole by 3 seconds!! This was, way past expectation, with some big names in the field like Colin Turkington and Adam Morgan from the BTCC, and we were all very excited. There were still a number of unknowns as we had never run the car for a full race distance let alone a 1-hour race!

And finally the second qualifying for the Falcon for the 1 hour Pre ’66 Coys Trophy Touring car race. It started dry and Julian put it P1 in class and P2 overall for a fine place to start the race. As I jumped in it started to rain so there was no way I was going any quicker. I completed the minimum three laps to qualify at very low speed to put as little stress on the tyres as possible keeping them in good fettle for the race

Saturday dawned dry and would remain so. The Jaguar Classic Challenge race was first up and Julian was immediately on the attack. Then ensued a fantastic battle for the lead with plenty of lead change and action down the field. As the driver window approached he was in the lead by 2 or 3 seconds and looking comfortable if pushing hard!

In he came and I jumped in. We executed a great pit stop and when all was settled I was surprised to see a 10 second lead on my board. I kept pushing but the rear tyres were suffering and I was having to negotiate a lot of traffic.

As first car it always slows you a little more than the followers so little by little Gary Pearson, hugely experienced generally but in these cars particularly, caught me. Finally he was on my tail and I had a huge moment at McLeans. He swept by and I was angry I had let it happen!! I was however more determined to set things right and set off after him.

Going into the last lap I saw my chance at Redgate. It was from quite far back but I launched the car at the inside gap and sailed through more or less in control!! I knew there was oil on the inside, as I had had a big moment on it earlier in the race, so needed Gary to try the undercut. This is how it happened and when he hit the oil he had to lift allowing me a small gap. Then we ran into yellows down the Craners and as they finished at Starkey’s we were back on it fighting like crazy.

Ahead was a mass of traffic and as I went into McLeans I wanted to undercut those ahead to keep the inside line to Coppice where there was another mass of traffic. This worked although Gary was no more than a few feet from my bumper. Arriving at Coppice there were cars everywhere but somehow we managed to navigate through them and it was all down to the Chicane. I kept tight to the right and left no gap.

We were on the absolute limit and going into the Chicane a very light touch and I thought I was going to spin! Working the wheel like crazy I held onto it but thought I had lost the race. But no! I got the power on and dashed for the line, winning the race by 0.8 seconds after an hour of flat out racing. Brilliant and what fun racing flat out, inches apart with Gary Pearson.

Sunday dawned bright and clear but still cold. I hoped this might help us with the RS 500 as they had a bit of a reputation for burning up the rubber with their fearsome acceleration.

First up was the Falcon and off the start with the huge power of the Falcon Julian shot into 2nd place and held that to the driver change window. I jumped in and stroked it to a lovely P1 in class and P2 overall. Another cracking race result.

Finally, the moment had come and Julian was lining up for the Motor Racing Legends Historic Touring Car Challenge. He led the field of 30 odd cars away and to start the green first green flag lap. We were getting 2 laps as the conditions were different from qualifying.

The red lights went out and Julian shot down the straight towards Redgate holding the lead. As they passed the pits for the first time he was in a close second and then, next time round down in eighth. A small mistake at Coppice on cold tyres had allowed all the closely following cars to swamp him. Never one to avoid a challenge he put his head down and was soon back to P3 and heading for the pits for our driver change.

For this series, the minimum time stationary is 1 minute so the team had a moment to check the car and then I was on my way feeling very excited at racing this iconic car. Giving it plenty and waiting for the pit stops to settle, I was enjoying every aspect of this wonderful car. Once the pit stops were finished I had a 10-second lead, increased that to 15 seconds and then decided to try to maintain that gap rather than risk pushing the car too hard as we had never run it this long.

This was working very well until on the second last lap it cut dead going out of Old Hairpin. I checked the Master and then switched on then reserve pump and Hallelujah!! It fired back up.

However, I had been told there was very little fuel in the reserve, and we were using it at 1 litre a minute so I was concerned we were not going to make the finish. I short-changed at 6,500 instead of 7,800 rpm and lift off cruised before braking to save fuel. To say I was bricking it would be an understatement!! However, we made it to the flag although the gap was down to 3.8 seconds to P2, the stunning Cologne Ford Capri of Wood and Morgan.

Unfortunately in the second race for the Falcon, it had an issue and Julian parked up on the second lap.

What a weekend!! Three wins and in such amazing cars. A huge thank you to Julian and Jade Thomas and the whole team at Denis Welch Racing. We left the circuit leading 4 championships. Fantastic!!

Next up the Silverstone International Trophy where I will be reunited with an old friend, the Morgan SLR of Simon and Kate Orebi Gann. Can’t wait!!