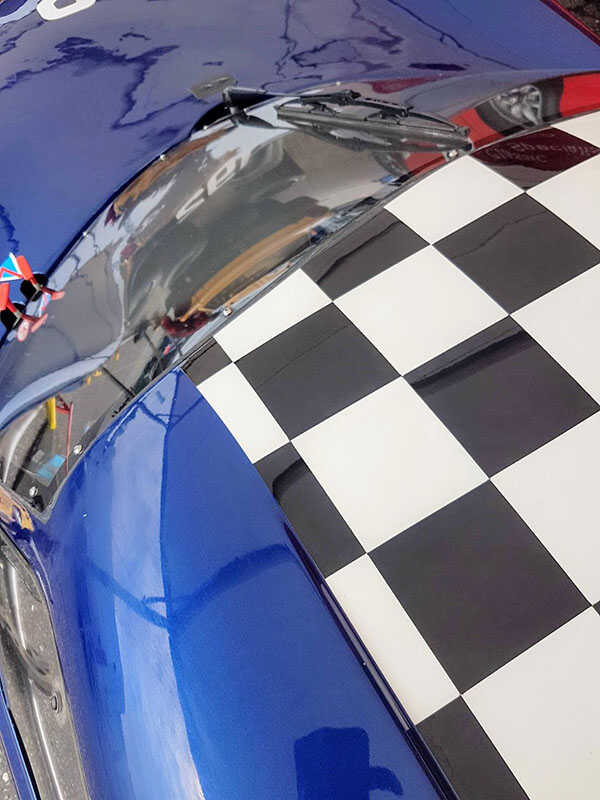 The Brands Hatch Masters weekend on the Grand Prix circuit was a treat in store. I have always loved this circuit and it was the first I ever raced on.

Friday testing was on the Indy circuit, a curious situation due to the very limited number of noisy days allowed on the full GP loop. However, it was still very useful to check all three cars, the lightweight low drag E Type, Ford Falcon and new to the team Chevron B8. All ran well so we felt we had a good opportunity for decent results come to the main event.

First out was the E Type and although it was handling well we were still struggling with the lower rev limit applied to all E types. The result is a somewhat distant P4 on the grid. The Jag engine needs revs to produce the power so we were left feeling that while we would have a good race, troubling the front was probably not going to happen.

Next up was the Chevron B8 in the FIA Historic Sportscar Championship. Last time out we finished P2 and we thought we might have a chance of a good result around the sweeps of Brands. Struggling a little with the handling we managed P2 to set up a good challenge.

Finally the Falcon and again, after a great run at Imola, we felt we were in with a good chance. However, the nimble Lotus Cortinas were a force to be reckoned with and we ended up P3 in class and P5 overall.

Qualifying left us with food for thought.

The first race was due at around 5 pm on Saturday in the E Type. A 90- minute race with Julian starting as usual. All was going well with a podium looking possible when the car snapped sideways and Julian limped back to the pits. Unfortunately, a rear wishbone had failed so we were out. A disappointing start to the races.

Sunday weather was looking really threatening with thunderstorms forecast all day. We wondered if we would even race. And looking out of the hotel window in the morning the rain was falling. Strangely by the time we got to the circuit, it was dry and sunny and stayed so for the rest of the day.

The Chevron race was first and somehow we managed to miss the very early call for the grid so had to start from the pit lane! Talk about making it harder for ourselves than we needed to! However, Julian did his usual storming stint and got us right into the mix before handing it over to me.

I set off in P3 to see if we could chase down the cars in front. I caught and passed the first for P2. The lead car was still some way off but I was catching reasonable quickly. As always catching is one thing, passing another.

Then a safety car period intervened. This could help or hinder depending on just where I was in relation to the safety car. Rounding Surtees, I saw the safety car and my heart fell. I was the only car behind it so thought I had lost a lap!! However, as I approached it waved me by and I set off to catch the train.

On the restart I was right behind the car in P1 and gave it all to get past, diving down then inside into Surtees. I then pushed like mad to get a gap which worked well, even getting past a car in another class to give me a buffer.

Then I started to get a strange feeling on the brake pedal. Shortly after the front brakes started to lock up really easily and then disaster!

I spun going out of Surtees and lost the lead with only 6 minutes to go. I was a bit puzzled as I had not done anything different that lap.

Giving chase and preparing myself to eat a truckload of humble pie I muttered to myself that there was no way I was going to get the position back. Then luck played a part. Someone spun into the gravel in a dangerous spot and race control threw a red flag. I immediately tried to work out if I had been in the lead on the last completed lap which would still give us the win on countback. And so it happened. Our first FIA Historic Sportscar Championship wins and with it, we took the lead of the championship.

Later we found that a seal in a rear calliper had failed so apart from the rear brakes failing fluid was leaking onto the rear tyres and hence the spin. Good to know!!

Finally, the pre-66 Touring Car race was set and Julian blasted off the grid soon getting up to P3. Ahead was a mighty duel between two Lotus Cortinas and the pace was very hot. Giving it everything Julian handed over to me in P3 and I set off to see if we could get our second podium of the day. I could see the other Falcon in my mirrors and he was catching me as I struggled with hot brakes and roasted rear tyres!

Working hard to keep him behind I saw a penalty notice on my pit board for a drive-through. I could not work out what it was for as I was sure I had not been naughty but came in the next lap. This put us back to P5 and P2 in class, so I set about seeing if we could improve. Next lap round it was P4 and I kept my head down thinking that would probably be it. Three laps from the end I saw P3 and we were back on the podium!

So, another great weekend of racing and more good results. As ever a huge thank you to Julian and Jade, Jeremy Welch and his crew at Denis Welch Motorsport.

The next stop is the Silverstone International Trophy. Can’t wait!